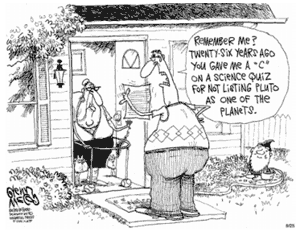 03. (Milton Campos-MG) Researchers ___________ that eliminating allergens may help prevent asthma.
A) has suspected
B) suspecting

This longest combined road and rail bridge in Europe connects Denmark and Sweden across the Oresund strait. The artifcial island itself is 4 km long. Shortly after being built, there were fears that not enough 05 people were going to use it, but as it turned out, Danes were buying less expensive houses in Sweden and commuting to work in Denmark, and the construction costs of close to 30.1 billion are expected to be paid off in 2035.
Available at: <http://www.hyd-masti.com/2008/03/worldsmost-interesting-bridges.html>. Accessed: Aug. 24th, 2010.

06. When the Oresund Bridge was built, there was the fear that not enough people were going to use it. However, the situation:
A) has not changed because Danes have no interest and no job in Sweden.
B) continues the same due to the fact that the cost of living is higher in Sweden.
C) has changed as Danes started to buy houses in Sweden and work in Denmark.
D) is the same because the constructions costs are very high for Denmark.
E) has changed because Danes wanted to be in peace with Sweden.

07. The Oresund Bridge is innovative because it provides different means of crossing it. According to the text, these means are:
A) airplane and car.
B) car and train.
C) bicycle and car.

Presente do Indicativo: IME-RJ–2011
Scientists say juggling e-mail, phone calls and other incoming information can change how people think and behave. They say our ability to focus is being undermined by bursts of information. These play to a primitive impulse to respond to immediate opportunities and threats.

The stimulation provokes excitement – a dopamine squirt – that researchers say can be addictive. In its absence, people feel bored. The resulting distractions can have deadly consequences, as when cell phone-wielding drivers and train engineers cause wrecks. And for millions of people these urges can inﬂict nicks and cuts on creativity and deep thought, interrupting work and family life.

09. What does the passage imply?
A) Bursts of information improve people’s ability to focus.
B) Scientists play with the primitive human impulses of responding to immediate opportunities and threats.
C) People feel bored when they talk on their cell phones or read their emails, nevertheless they are addicted to it.
D) Feeling excited at work and among family members demands creativity.
E) Being constantly fed with different stimuli from multiple sources may make people unable to get rid of such excitement.

10. The text states that human beings instinctively:
A) provoke opportunities and threats to other human beings.
B) move towards that which threatens them.
C) react to sudden changes they experience.
D) interrupt work and family life.
E) undermine bursts of information.