Your Lifestyle, Your Genes, And Cancer 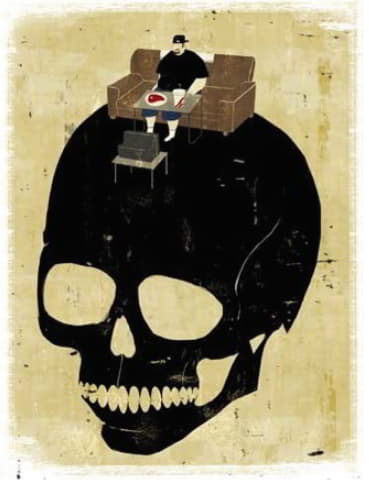 Now research explores the complex interactions that cause our most dreaded disease. A look into some of the steps you can take to reduce your risk.

We’ve known for a long time that a high-fat diet,

obesity and lack of exercise can increase the risk of

conditions that affect millions of Americans. What we

05 are finding out now is that those same lifestyle factors

also play an important role in cancer. That’s the bad

news. The good news is that you can do something about

your lifestyle. If we grew thinner, exercised regularly,

10 or vegetable sources of protein) and ate diets

rich in fruits and vegetables, and stopped using

tobacco, we would prevent 70 percent of all cancers.

The strongest evidence of the importance of lifestyle

in cancer is that most common cancers arise at

15 dramatically different rates in different parts of the

in the United States – colon, prostate and breast

cancer – are relatively rare in other parts of the

20 striking, when people migrate from other parts of the

world to the United States, within a generation their cancer

rates approach those of us whose families have lived in

this country for a long time. Even if people in other parts

of the world stay put, but adopt U.S. lifestyle, their risk of

their rates of colon, breast and prostate cancer have

What is it about our lifestyle that raises the risk of

many types of cancer? The main culprits seem to be the

known about the importance of tobacco and cancer for

more than 50 years, we are just beginning to understand

how diet, a healthy body weight and regular exercise can

protect us against cancer.

35 A striking example of the profound influence of diet

was reported last summer in The Journal of the American

of patients with colon cancer in the years following surgical

removal of the cancer. Over the next five years, those

40 who ate a traditional Western diet had a threefold greater

likelihood of developing a recurrence of the disease than did

those who ate a “prudent” diet rich in fruits and vegetables

and including only small amounts of red meat. How had

diet affected these patients? The surgery clearly had not

45 removed all their colon-cancer cells: prior to the surgery,

some cells had already spread from the primary tumor.

The Western diet had somehow stimulated the growth of

Obesity is the second most important factor in causing

50 cancer in Western populations after tobacco, and there is

evidence that maintaining a healthy weight is protective

against the disease. A study by the American Cancer

Society in 2003 found that the heaviest people, in

comparison with the leanest, had a significantly increased

55 risk of death from 10 different kinds of cancer in men,

and from 12 different kinds in women. The most extreme

increased risk) and uterine cancer in women (more than

01. The text deals with the relation between cancer and:

B) the influence of diet in one’s lifestyle.

C) the lifestyle of people in the USA.

D) an evidence of its increase in old people.

02. Up to recently, it has been well known that obesity, high-fat diet and lack of exercise:

A) are important factors in increasing the risk of heart disease and diabetes.

B) are good strategies for avoiding the risk of heart disease and diabetes.

C) are conditions for the developing of various kinds of heart disease.

D) have become a very common thing in the world’s lifestyle.

03. According to the text, millions of Americans:

B) have diabetes due to lack of exercise.

04. The alert the article is raising at this point is that:

A) people who have contracted heart disease or diabetes are apt to contract cancer.

B) high-fat diet, obesity and lack of exercise increase the risk of developing cancer.

C) obese people who have cancer and do not exercise are likely to die of heart disease.

D) the risk of developing cancer is much higher than the risk of contracting heart disease.

05. Simple Past: One of the advices the article is sending people is:

A) to stop eating too much poultry.

B) not to mix vegetable with fish.

D) not to eat too much fish.

06. Simple Past: The text states that 70 percent of all cancers could be prevented if people:

A) had a better diet and smoked less.

07. According to the text, one of the following is NOT among the most common cancers in the United States:

08. Also according to the text, some cancers that are common in the United States, in other parts of the world:

A) have become relatively rare.

B) do not exist altogether.

09. A curious circumstance is that people from other parts of the world migrate to the United States, their cancer rates:

A) reach 1/10th of the rates of their original countries.

B) come close to the Japanese who stayed in their own country.

C) keep the same rate as they enjoyed in their countries.

D) approach the rate of American families in just one generation.

10. Simple Past: The most important factor in causing cancer in the US population is, in the CORRECT order,

A) tobacco and obesity.

B) exercise and obesity.