Text I
After capitalism
The era of transition that we are entering will be disruptive – but it may bring a world where markets are servants, not masters. 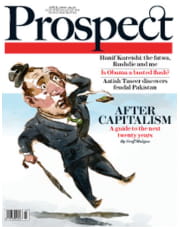 To understand what capitalism might become, we
first have to understand what it is. This is not so simple.
Capitalism includes a market economy, but many
traditional market economies are not capitalistic.
05 It includes trade, but trade, too, long precedes
capitalism. It includes capital – but Egyptian pharaohs
and fascist dictators commanded surpluses too.
The French historian Fernand Braudel offered
perhaps the best description of capitalism when
10 he wrote of it as a series of layers built on top
of the everyday market economy of onions and wood,
plumbing and cooking. These layers, local, regional,
national and global, are characterised by ever
greater abstraction, until at the top sits disembodied
15 finance, seeking returns anywhere, uncommitted to
any particular place or industry, and commodifying
anything and everything.
Only a few decades ago there was great interest
in what would supersede capitalism. The answers
20 ranged from communism to managerialism, and
from hopes of a golden age of leisure to dreams
of a return to community and ecological harmony.
Today these utopias can be found in the movements
around the World Social Forum, on the edges of all of
25 the major religions, in the radical sub-cultures that
surround the net, and in moderated form in thousands
of civic ventures across the world.
MULGAN, Geoff. Available at: <http://www.prospectmagazine.co.uk/article_details.php?id=10680>. Accessed: Jun. 17th, 2009.

01. The introduction to the text implies that, at present, the capitalist system:
A) guides transitions.
B) rules the world.
C) serves the market.
D) teaches governors.

02. The BEST topic for the first paragraph is that:
A) capitalism includes market economy.
B) it is not very easy to define capitalism.
C) the elements in capitalism are traditional.
D) we cannot tell the future of capitalism.

03. According to the text, market economy, trade and capital (1st paragraph) are:
A) alternatives to ancient policies.
B) byproducts of new capitalism.
C) insufficient to define capitalism.
D) theories of economic systems.

04. Gerund, Infinitive and Causative Verbs: Braudel suggests that capitalism is:
A) mostly defined by agriculture.
B) moving towards immateriality.
C) oriented towards local finance.
D) related to specialized industry.

05. Gerund, Infinitive and Causative Verbs: The word disembodied (line 14) can be BEST understood as:
A) foreign.
B) marketed.
C) nearby.
D) vague.

06. Communism and managerialism (line 20) are mentioned in the text as systems that:
A) are considered unwanted utopias nowadays.
B) could have been alternatives to capitalism.
C) managed to supersede globalized capitalism.
D) were commonly considered the golden ages.

07. We can say that the author of the text thinks that religion
A) can be seen as sub-culture.
B) is a radical way of living.
C) allows for utopian ideals.
D) induces civic engagement.

08.  We can infer that the cartoon above says that socialism
A) interested few workers.
B) found hope in capitalism.
C) scared people in the US.
D) surprised most politicians.