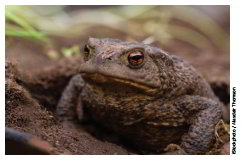 Common toad, bufo bufo.
When it comes to predicting earthquakes, toads – warts and all – may be an asset. British researchers said recently that they observed a mass exodus of toads from a breeding site in Italy five days before a major tremor struck, suggesting the amphibians may be able to sense environmental changes, imperceptible to humans, that foretell a coming quake.
Since ancient times, anecdotes and folklore have linked unusual animal behavior to cataclysmic events like earthquakes, but hard evidence has been scarce. A new study by researchers from the Open University is one of the first to document animal behavior before, during and after an earthquake. The scientists were studying the common toad – bufo bufo – at a breeding colony in central Italy when they noticed a sharp decline in the number of animals at the site. Days later, a 6.3-magnitude earthquake hit, killing hundreds of people and badly damaging the town of L’Aquila. Researcher Rachel Grant said the findings suggested that toads are able to detect pre-seismic cues such as the release of gases and charged particles, and use these as a form of earthquake early warning system.
Initially puzzled by the toads’ disappearance in the middle of the breeding season, the scientists tracked the population in the days that followed and found that 96 percent of males, who vastly outnumber females at breeding spots, abandoned the site 74 kilometers from the quake’s epicenter, five days before it struck on April 6, 2009. The number of toads at the site fell to zero three days before the quake, according to the tudy, published in the Zoological Society of London’s Journal of Zoology. Dr. Grant, the report’s lead author, explained that a day after the earthquake, they all started coming back. The numbers were still lower than normal and remained low until after the last aftershock. She added that one possibility is that the animals sensed a change in the amount of radon emitted by the Earth because of the buildup of pressure prior to a quake.
Scientists also have surmised that animals may be able to detect minor tremors imperceptible to humans, or that they sense electrical signals emitted by rocks under stress before an earthquake. According to Dr. Grant, the sense may be the result of millions of years of evolution, a trigger that tells the toads to move to safer ground. She also said that an earthquake could wipe out a population in that area and a landslide or flood could kill virtually 100 percent of the males, and quite a lot of the females. Several countries have sought to use changes in nature, mostly animal behavior, as an early warning sign, without much success. The city of Tokyo spent years in the 1990s researching whether catfish behavior could be used to predict earthquakes, but abandoned the study as inconclusive.
Roger Musson, a seismologist with the British Geological Survey, said that the problem of studies like the Italian toad research lay in proving the connection between the animal behavior and the quake. According to him what happens is that somebody observes some strange animal behavior then there is an earthquake, so they link the two. He also observed that there are probably plenty of cases in which there is strange animal behavior and no earthquake. Musson added that the new study was “another bit of data in the large pile that has been accumulating over the years. But it’s not in any shape or form a breakthrough.”
Available at: <http://abcnews.go.com/international/wirestory?id=10247369&page=1>. Accessed: Apr. 10, 2010. (Adapted).

03. Special Difficulties: In paragraphs 1 and 4, the word may was used to:
A) express wish.
B) make requests.
C) show possibility.
D) indicate purpose.
E) give suggestions.

08. According to the text, it can be concluded that:
A) amphibian behaviour is actually a pre-seismic cue.
B) coming earthquakes are still impossible to be predicted.
C) animal response to natural disasters has evolved over the years.
D) breeding seasons change drastically when animals sense tremors.
E) clear connections between toad exodus and quakes were proved.

11. (ITA-SP) “Scientists have been talking about producing better foods (I) genetic engineering ever since the technology first became available more than 20 years ago. Now, after decades of biotech setbacks and controversy, American consumers finally have something they can sink their teeth into. The US Food and Drug Administration (FDA) last week endorsed as safe the first genetically altered food to be sold to consumers – a tomato called the Flavr Savr and billed as offering ‘summer taste’ all year long. The biotech industry immediately hailed the government decision as the breakthrough it had been waiting for. ‘This is a real shot in the arm’, says Roger Salquist, Calgene’s chief executive officer. ‘It validates the company’s science.’ But the new tomato is also a fat target for critics of biotechnology. […] ‘The middle class is moving in the direction of organic, healthy foods’, says Rifkin, ‘The last thing they want to hear about is gene-spliced tomatoes.’”

12. (UFRGS) Fill in the blank below with the BEST alternative.