01. Futuro Simples em Inglês: (UNESP-SP) Assinale a alternativa que preenche a lacuna da frase a seguir CORRETAMENTE. He will ________ almost everything you ask him.
A) do
B) to do
C) doing
D) does
E) did

03. Futuro Simples em Inglês: (UNIRIO-RJ / Adaptado) The word shall in “This too shall pass“ conveys the meaning of:
A) certainty.
B) likelihood.
C) possibility.
D) suggestion.
E) expectation.

04. (Mackenzie-SP) Indicate the alternative that BEST completes the following sentence. “A prize ________ to whoever solves this equation.”
A) has given
B) should give
C) is giving

D) will be given

E) must have given

Through much of the past climate change negotiations, there has been little interaction between the Brazilian government and non-governmental organizations. In 2002, however, Brazilian NGOs formed a network because they were not satisfed with how the government dealt with important climate concerns, especially the link between deforestation and global warming. The network, called the Climate Observatory, aims to become a vehicle for inﬂuencing government views and  policies on climate change. A frst priority was to direct more  attention to deforestation, an important yet controversialissue, both in Brazil and the international arena. In 2002,  the network had 26 members from all over Brazil, and the effects of the network have included a broader participation of NGOs in the climate change debate in Brazil.
Available at: < http://www.scidev.net/en/key-documents/brazilian-ngos-establish-a-network-to-influence-cl.html> .
Accessed: Aug. 12th, 2010.

07. The idea of organizing a network called Climate Observatory:
A) was established in a social network discussion about Brazilian policies.
B) emerged from a dissatisfaction with government’s policies on climate issues.
C) was structured by government and non-governmental members.
D) emerged from 26 members from all over Brazil.
E) came from an initiative from the Brazilian government.

08. After reading the text, we can conclude that the main aim of the network is:
A) to build a tool to fight against the global warming.
B) to draw national attention to deforestation in Amazonia.
C) to create a problematic issue both in Brazil and around the world.
D) to negotiate deforestation among national and international NGOs.
E) to have an effect on the government’s climate policies.

09. The word yet in the sentence “A first priority was to direct more attention to deforestation, an important yet controversial issue […]” represents: 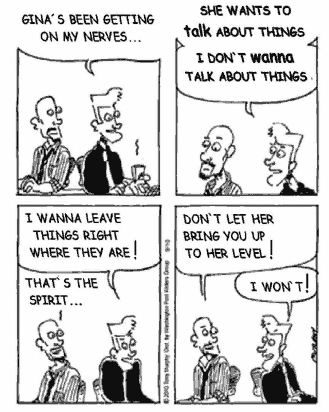 11. “Wanna” in the second square is used in informal language, during conversation. It is the short form of:
A) Want for.
B) Want up.
C) Want of.
D) Want to.
E) Want off.